The phone is a lifeline to the family of a child with mobility issues.

When the phone rang at Variety, the call began like so many others. Catie needed prosthetics, but insurance had run out and her family’s finances were at their limit.

Her mother’s voice was a combination of a resolute fighter used to advocating for her child, and the quivering hopeful voice of a mother tired from the fight.

But this call was different. Variety’s mission is to assist children living with special needs, to change their lives for the better.

Catie was granted her prosthetics. Catie gained mobility, her family gained hope, and the Variety community celebrated right along with them.

And then the phone rang again at Variety Kansas City.

This time it was a child’s voice, brimming with confidence and enthusiasm. Catie wanted to help other kids like herself. She had a plan, she had a name, and she had a goal. Catie Cares was launched. A single child, giving back, armed with childlike ideas on how to raise awareness and funds. And it was contagious.

Phone calls were made.

Catie Cares caught the attention of a major philanthropic business in our area, Waddell and Reed. As a result, this year Waddell and Reed underwrote Variety Kansas City’s primary fundraiser with one of their executives chairing the event and appearing on stage with Catie.

They cared because Catie cared, and because at the end of the line of another desperate phone call, Variety cared.

Over 40 very special athletes started 2013 with new back packs, bats, balls and uniforms thanks to Variety of Southern California’s support of the Pony Baseball “Champions” Division. Pony Baseball provides quality baseball experiences for children whose limitations make it difficult to participate on “mainstream” teams. The league is dedicated exclusively to providing children ages 3 through 15 the opportunity to learn, participate in and enjoy the wonderful sport of baseball. 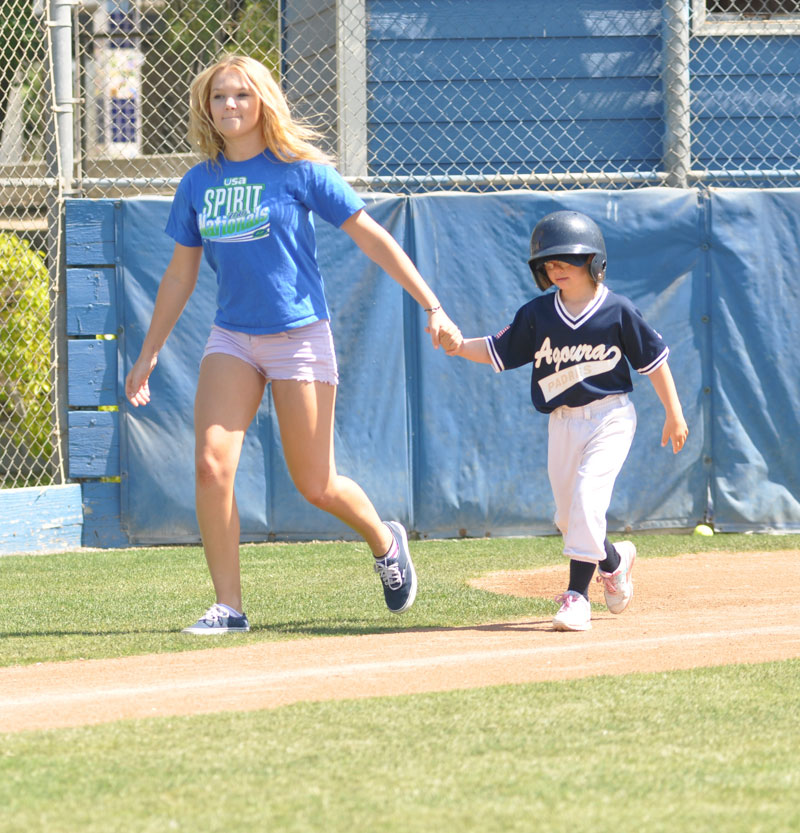 The mission is to not only teach the game of baseball, but to instill in all players the ideals of sportsmanship, honesty, loyalty, courage and respect for authority. The Champions Division features players who are visually or hearing impaired, physically disabled, or mentally or emotionally challenged. The players are assisted by volunteer coaches and players from conventional teams who assist these players as “on field shadows” at every game. 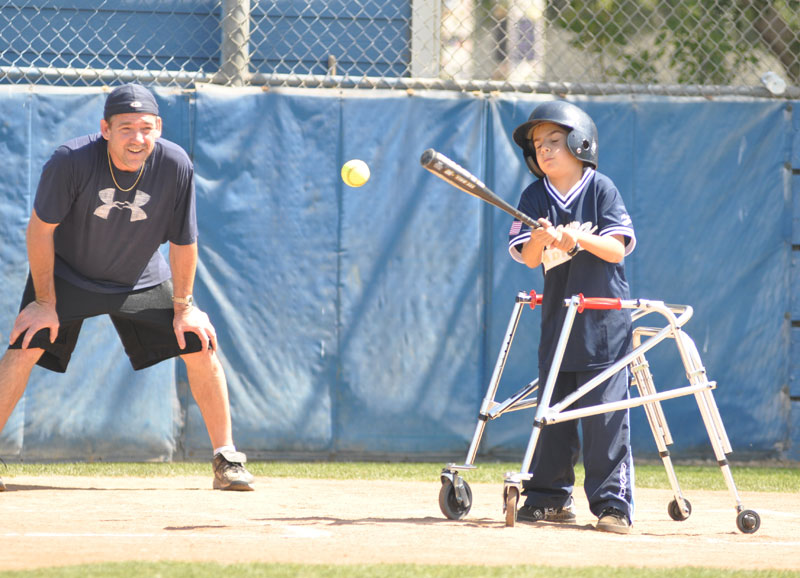 These games contribute to the physical, cognitive, emotional and social well-being of players with disabilities, thereby positively impacting their life skills. Thanks to a grant from Variety of Southern California, this very special league was able to expand this concept to other communities in SoCal to help even more kids with disabilities experience the “crack of the bat and the roar of the crowd”.

Through these efforts we were able to provide 15 children with 3-year scholarships to attend a quality preschool program, and 150 children with brand new furniture and equipment for the school. This was not only necessary to improve the health and safety of the children’s environment but is a living example proving to these children that they are worthy and deserving of a quality life.

The devoted support that these scholarships along with the safe and healthy school environment greatly decreases the probability of these children ending up in unsafe environments which has is statistically proved to be detrimental to their success upon reaching adulthood. The children at Variety Early Learning Center are no strangers to substandard surroundings due to the economic situations they live in. Variety of Southern Nevada has been dedicated to their success, health and happiness for over 50 years and will continue to be.

Speed. Independence. Freedom. Those three words embody what children love about riding bikes but for children with Spina Bifida, jumping on a traditional bicycle and pedaling away is often not a possibility. Specialized bikes are available for children who can’t balance or pedal a traditional bicycle, but these specialized bikes are too costly for most families to purchase out of pocket, and insurance generally doesn’t cover them. Thanks to Variety of Iowa, the high price tag does not have to be prohibitive to a child with Spina Bifida experiencing their own bicycle adapted to their own abilities and needs.

Isaiah is a 6-year old boy who was born with Spina Bifida and has undergone several surgeries since birth. He is unable to walk independently and primarily crawls or uses a wheelchair for mobility. The specialized bike became Isaiah’s favorite activity when he worked with his physical therapist. He learned to independently pedal the bike, logging several laps up and down the hallways at Blank Children’s Hospital.

Isaiah’s family applied to Variety to grant a bike specialized to his needs. “As a 6-year old with four older siblings, Isaiah is very active and loves to do everything his brothers and sisters do. The specialized bicycle will help with his muscle strength. The social aspect of the bicycle is an added benefit. It will provide more opportunities for Isaiah to engage in social conversation and “normal” activities at home and within his community. This would help boost his self-esteem while providing an opportunity for sports participation, recreation and exercise.” 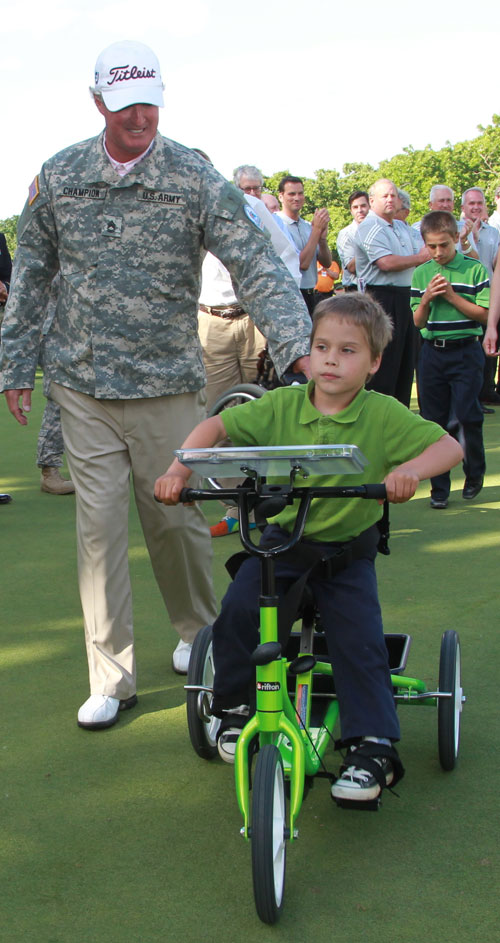 Variety invited Isaiah and his family to the Principal Charity Golf Classic Isaiah was presented with his brand new, lime green specialized bicycle, complete with pulley system and a trainer for using it as a stationary bike. Isaiah declined the opportunity to address the crowd, but he eagerly climbed out of his wheelchair and onto his new bike and rode it proudly off of the green and onto the patio of the clubhouse.

Isaiah has spent many hours biking with his siblings. It is amazing to think about what a difference a small thing like a bicycle can make in the life of a child who often does not get to experience the same independence as other children. When Isaiah was asked what the best thing about his new bike was, he had one word, “Speed.” What joy it brings to our hearts that he gets to experience the thrill of speed!

Jackson Cunningham, from Oakwood, Illinois, is no ordinary 11 year old. He suffered a stroke when he was 8 that left him unable to move a muscle on his left side. The resulting foot drop and his overall instability caused Jackson to frequently stumble and trip. Jackson was at high risk of falling and sustaining serious injuries that could have increased the chance for impairments, activity limitations, and participation restrictions and without sufficient exercise, muscles atrophy and lose strength and mass, which can lead to significant loss of limb function

Denied by insurance, the Cunningham’s turned to Variety of Illinois, which granted Jackson a WalkAide Functional Electrical Stimulation System, which improved his walking ability.

Jackson became one of the 100 pediatric stroke patients the Rehabilitation Institute of Chicago sees each year. Jackson and his family were highly motivated and dedicated to the rehabilitation process – not only for Jackson, but for another special stroke victim — Senator Mark Kirk of Illinois, whose stroke came a year later. Jackson had been through hundreds of hours of rehab, and knew exactly what the Senator would be facing, so he wrote a letter letting the Senator know that he was going to be okay. “Do not give up on yourself. All the hard work is worth it. RIC will make you work hard, but you’ll get lots of things back fast.” Jackson wrote.

Jackson’s letter-writing was the brain child of his speech therapist, who used the exercise to help him relearn cognitive skills. To his surprise, the Senator wrote back and not only commented on what they have in common but offered his own words of encouragement, “My mother used to say: ‘Socks up! Little Cabbage!’ which is another way of saying ‘Keep your spirits up!’”

That Pen Pal campaign was the beginning of their friendship. After several letters back and forth, the Senator and his young supporter met at RIC when the Senator was still in a wheelchair and Jackson was back at RIC, when Jackson received a cast on his right arm, designed to make him use improve and use his left arm. He called it the “thumbs up” cast. Throughout both their long recoveries, Jackson and Senator Kirk championed each other often until they had the opportunity to meet.

“Dear Pen Pal,” Jackson wrote, “Yesterday was an amazing day! It was very cool that I got to meet you and it would be cool to see the Senate floor like you offered. Keep working hard so you can show me the Senate floor!!”

When Jackson became discouraged as he missed playing baseball, Senator Kirk reassured him, “Jackson,” he wrote, “I expect you’d do absolutely everything your doctors and PT folks say. And if you don’t, you’ll have to testify before the United States Senate.”

Throughout the over 30 letters the two exchanged, the most inspiring from Jackson was a five-second video of him running for the first time since his stroke. Senator Kirk said, “My great dream became to run alongside him.”

This sensational story was picked up by People Magazine on September 30, 2013 called, “An Amazing Friendship: Dear Senator, I had a Stroke Too,” by Sandra Sobiera J. Westfall. NBC Nightly News also ran this beautiful story.”

Variety of Georgia’s Caring for Kids program provides access to uncovered medical services and devices for special needs children. Variety was pleased to gift a new cochlear implant for Robert.

Robert, an excellent student, has a passion for science and swimming. He wants to study sea animals and become a marine biologist. Since hearing devices cannot be near water, he experiences one major setback. 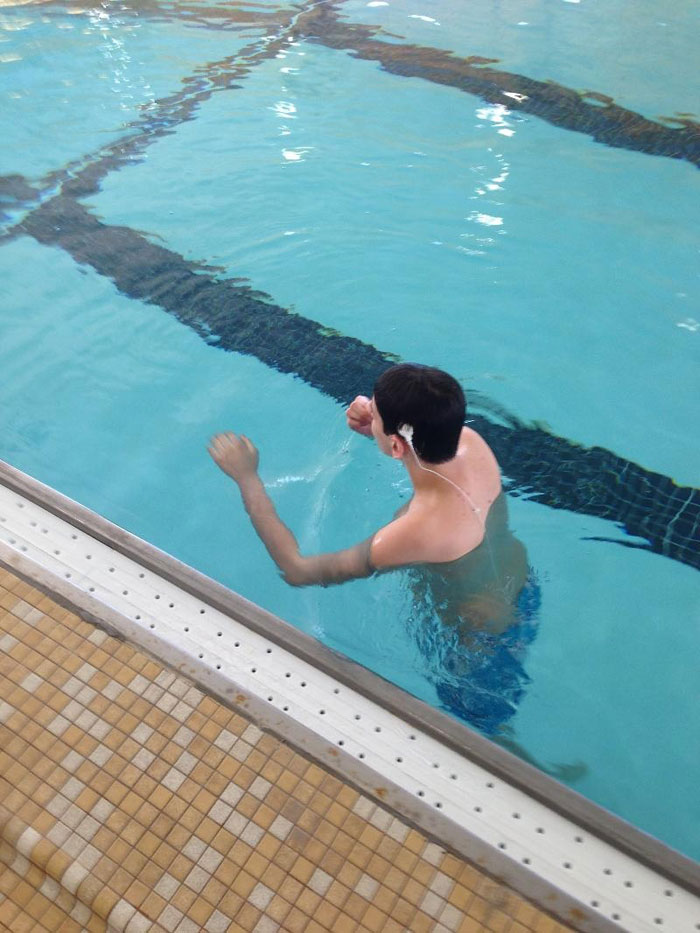 The solution: provide Robert with the first hearing device connected to the cochlear implant that can be used in water. Robert was excited, he knew scuba diving classes and exploring the underwater world were now in his reach. The new device would increase hearing clarity by at least 20% outside of the water and provide hearing capabilities in and near water. The price for the device was out of the family’s current financial capabilities and their insurance denied the claim. Disappointed and heartbroken, Robert’s mother reached out to Variety and his application was approved.

Robert’s new cochlear implant has allowed Robert to explore his passions and give him the opportunity to become a marine biologist. He is now able to swim, dive, and hear the sounds of water all around him. This is the newest technology; every sound enhanced to provide better hearing out of the water.