Variety added a ray of Florida sunshine to Florida’s East Coast when it granted an adaptive bike to the Easter Seals of Daytona Beach. This special stability-enhanced bike will give mobility to handicapped children who would not otherwise experience it. Many non-profits, such as Easter Seals, do not have in their budgets the resources to purchase this specialized equipment which can make such a difference in the lives of mobility-challenged children.

The theatre lobby was filled with the laughter of gleeful children. A few tears were shed as Clint DeMarsh recalled the love that his parents had for children and for children’s causes. The torch has been passed. Joe DeMarsh, Clint’s nephew, is the newest member of Tent 70’s Board of Directors. The legacy fostered years ago by the DeMarsh family forbearers continues.

Once a year children everywhere ask Santa for a new bicycle at Christmas. Last year that wish came true for several young patients at Quillen Rehabilitation Hospital. Variety of Eastern Tennessee granted new customized bicycles for six children with special needs. Working together with Quillen’s physical therapists and Carr Rehab, Variety was able to identify the children who were most in need of this amazing gift. 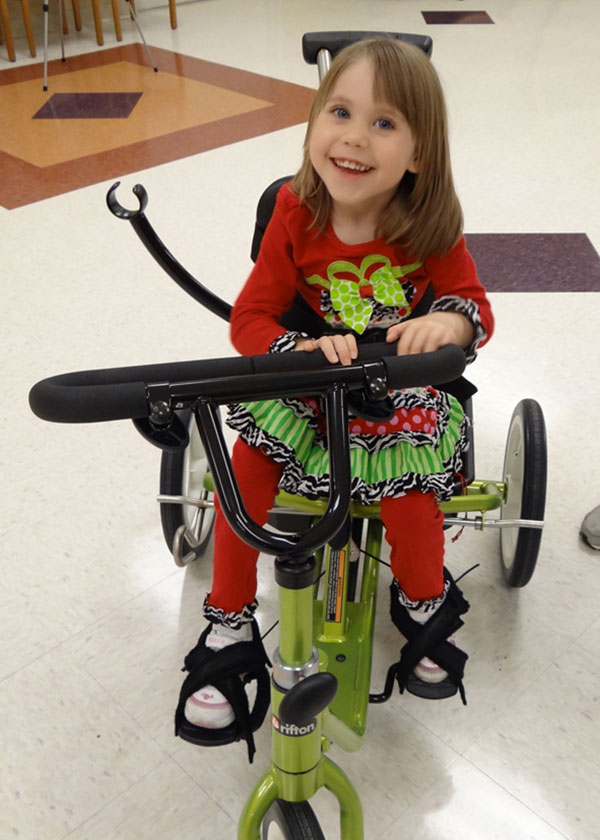 Studies have found that independent mobility is directly tied to developmental progress. The tricycles presented will help these children develop much needed motor skills giving them the opportunity to have more peer interaction as well as a great form of cardio vascular activity. These special adapted bikes will not only provide the children many years of entertainment and exercise, they will also significantly improve their stability and trunk support helping them gain mobility. Three of the recipients; Ryleigh Scott age 5, Jordan Clem age 10 and Destiny Swanner age 15, who are all very active vibrant children with cerebral palsy that would never have this opportunity without a customized bicycle.

If the famous quote, “We are our choices” is true; many would say that Erin and her husband are admirable, brave and exceptionally caring.

According to Erin, “the choice to adopt children with special needs just made sense. My degree is in special education, so we just knew it was something that we would do.”

Although the couple already has biological sons, ages 11 and 14, they made one more addition to the family in 2010. They brought home Oksana from Ukraine. Now eight, Oksana has cerebral palsy, microcephaly and is on the autism spectrum. When this loving family brought her home she was at the level of a toddler so her therapies through school were simply not enough. 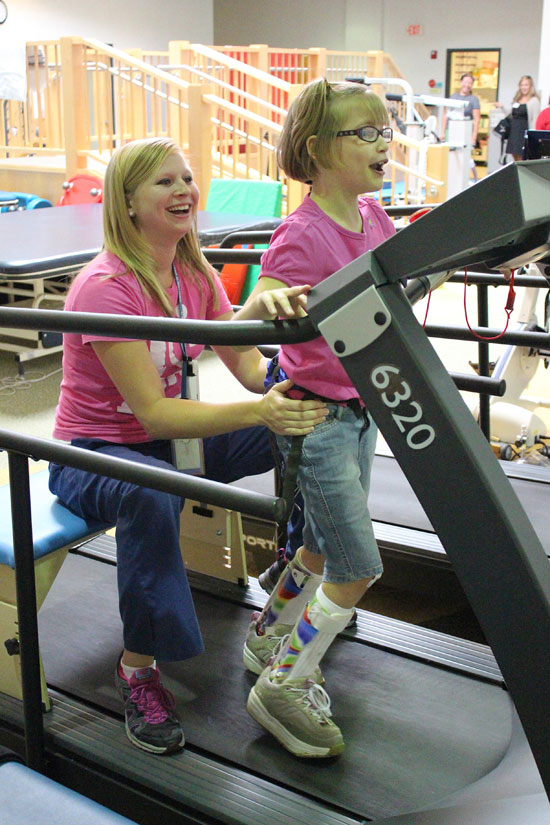 “We found that school therapies focused on school behavior and what we really needed with Oksana was therapy to help her with community and home skills. Before we adopted her she was confined to a bed for five years – so she needed help with simple things like stability and feeding.”

This is where Variety’s new program, Ther-Happy Kids, came into play. Ther-Happy Kids ensures that children with disabilities not only have the medical equipment they need, but the therapy to support them while they use it. Through this program, Oksana has been going to four hours of therapy each week at a Variety agency.

Both of her kinds of therapy, physical and occupational, have been helping Oksana greatly. “Oksana is increasing her stability and learning to manipulate her environment,” says Erin.

This family focuses on the little day-to-day triumphs for Oksana, each of which is accomplished because of the help she received through her therapy. “This week she held a fork while eating and I couldn’t have been happier,” said Erin. We are so happy that Oksana’s steady progress is making life a little easier for her each and every day. 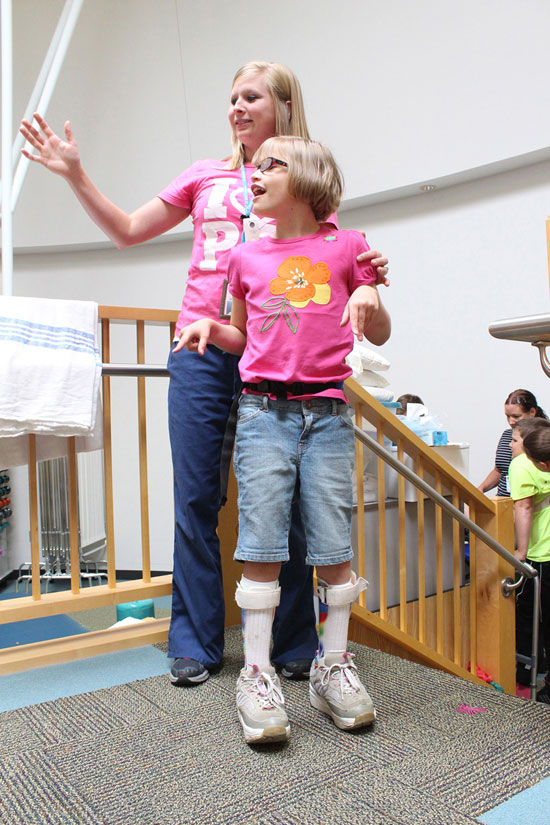 Texas native Wynter Young, 7 years old, is the first kid to arrive at Ballet and Cheerleading practice every week. Wynter lives her life with a cheerful spirit and huge smile. She also lives with Down Syndrome and a severe delay in her gross motor skills, making everything she has achieved so far in life, a miracle. When Variety first met Wynter, she had recently undergone a surgery that left her dependent on her parents to do most things.

Wynter’s therapists came to Variety with a giant goal to re-condition her to use her legs and needed the money to help achieve this. Variety provided Wynter with the physical therapy she needed to be able to ride the bike that she had always dreamed of having. A few months after her last session in therapy, Wynter was surprised with her very own adaptive tricycle. Her new trike, made especially for her, allowed her the freedom to be a kid, strengthening both her muscles as well as her confidence.

Today, Wynter is living life like every child should. Through Variety at Work, Wynter was allowed the opportunity to be the “Game Ball Girl” at a minor league basketball game, walking down to the court on her own and giving the referee the ball to start the game!

We are so proud of Wynter and all of her accomplishments at such a young age. Variety of Texas has empowered this brave little girl who has proven over and over again, that she can do anything she puts her mind to, regardless of her physical obstacles.

Angel was born with a rare birth defect called, Arthrogryposis Multiplex Congenital. His arms hang uselessly by his side. Jennifer, a single parent at age 20 carried him to doctors all over the area trying to get him help. Specialist Dr. Robin Clark told her the only facility in North America that could help Angel was Nemours Children’s Hospital in Wilmington Delaware.

Variety the Children’s Charity of the Desert adopted Angel and his dedicated mother and made all arrangements for travel, accommodation and all hospital expenses, and sent them to Wilmington Children’s Hospital for five days where Angel was fitted with “Magic Arms.” 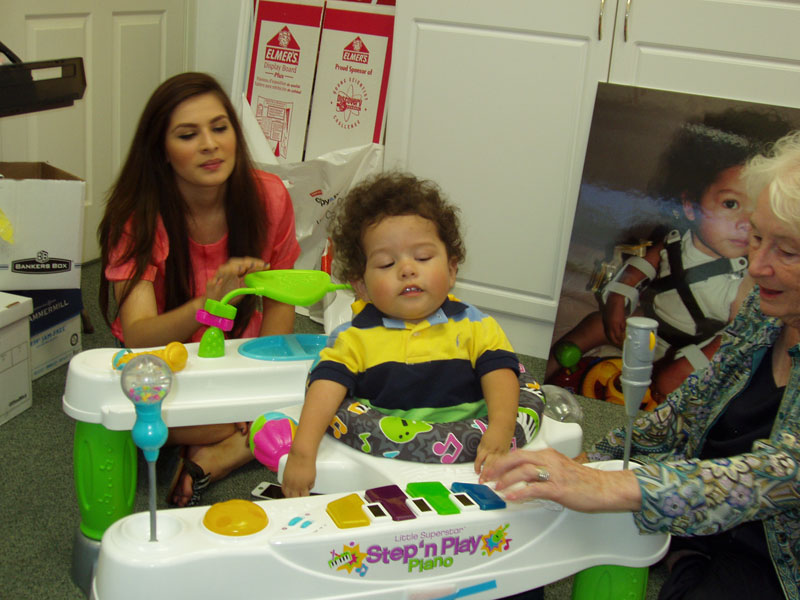 Angel requires constant and specialized physical therapy. Jennifer’s car spends more times in the shop than it does on the road. She says a prayer every time she and Angel get into it and hopes the tires, the steering and brakes will hold out for one more journey to Loma Linda Hospital.

The most recent trip was a disaster. She ran into a heavy rain shower and her windshield wipers quit. She was blinded and pulled over to the roadside and broke down. Together with the NABC, Variety will present Jennifer with a newly refurbished 2013 car at the NABC Conference in Palm Springs.

Granting access to activities and social inclusion is a focus of Variety of Western Michigan. Children with special needs are often bystanders in life, rather than active participants due to a lack of infrastructure in the community.

The Grand Rapids Symphony is committed to equal access. Music in general is therapeutic to children and Variety helped fund the Symphony’s “Access to Music” program, concerts that are provided free to children with disabilities or economic limitations.